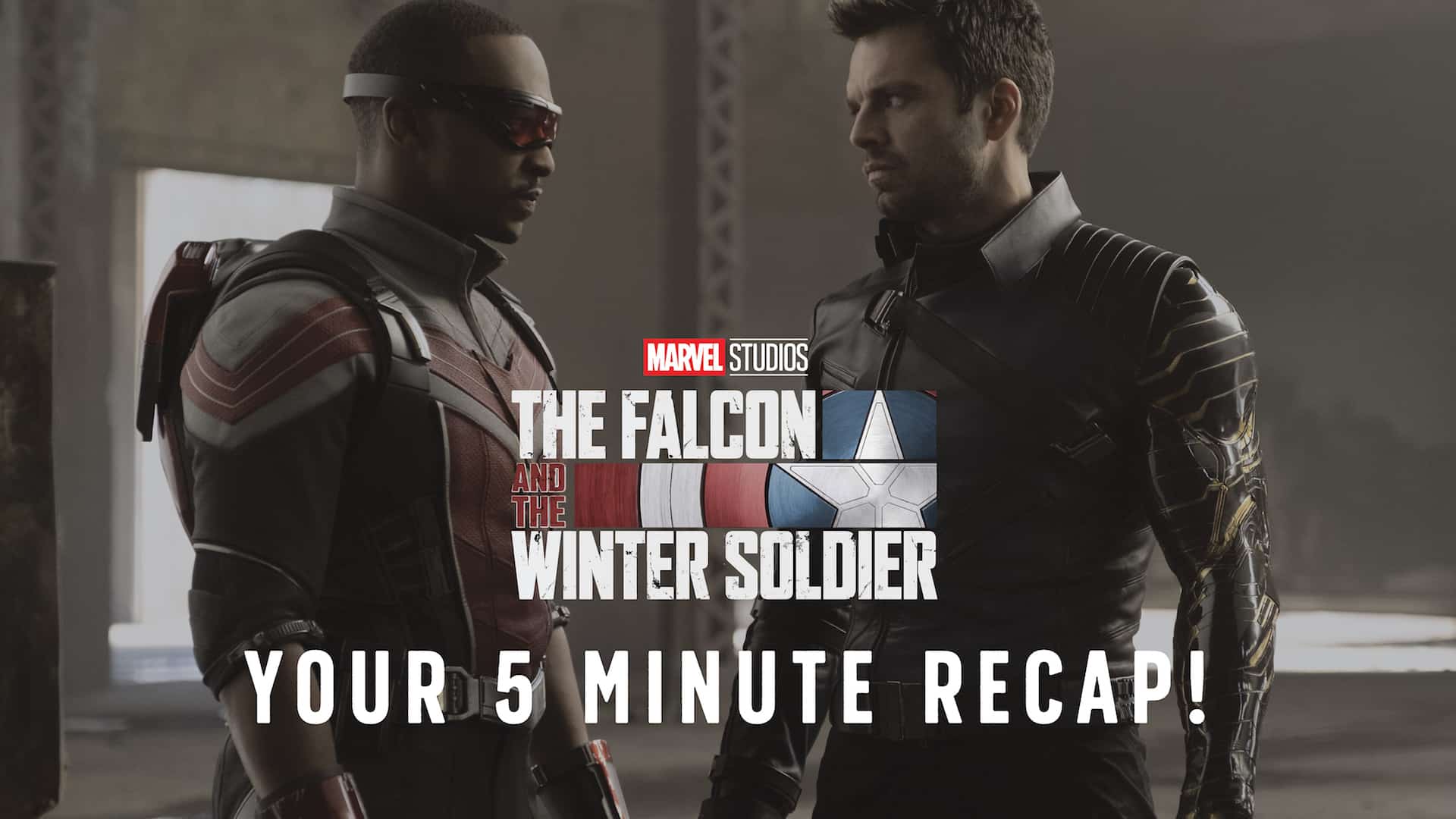 “Following the events of Avengers: Endgame, Sam Wilson AKA Falcon and Bucky Barnes AKA Winter Soldier team up in a global adventure that tests their abilities – and their patience.”

Episode 1 of Marvel Studios second Disney+ series, The Falcon and The Winter Soldier debuts this Friday, March 19th. With less than 72 hours to go (I’m not counting down, you are!) We thought we’d give you a 5-minute rundown on what our titular characters have gone through in the Marvel Cinematic Universe to get where they are today.

James Buchanan ‘Bucky’ Barnes is the best friend of Steve Rogers, we first meet him early on in phase 1 of the MCU in Captain America: The First Avenger. After leaving Rogers in New York, Bucky enlists into the US army. He’s assigned into the 107th Infantry Regiment which gets captured by HYDRA, during which time Barnes gets experimented on by Arnim Zola. Barnes, along with the rest of his regiment are later rescued by Steve Rogers who has since become Captain America. The two of them form the Howling Commandos to battle the Red Skull’s forces. During an attempt to capture Zola in the Austrian Alps, Barnes falls hundreds of feet from a train, his body is never recovered and he is presumed dead.

Sam Wilson (Anthony Mackie) is first introduced in Captain America: The Winter Soldier, after a run-in (pun intended) with Steve Rogers – “On your left.” Sam’s working at the VA Medical Centre as a counsellor for veterans experiencing PTSD, he’s recently retired from the Air Force after his wingman Riley was killed in action. Sam forms an instant bond with Rogers aka Captain America, as they bond over their shared military trauma. The pair team up for the first time after Steve goes on the run from S.H.I.E.L.D. following the assassination of Nick Fury by HYDRA, which has been embedded inside S.H.I.E.L.D. Sam offers to help Steve take down HYDRA, after revealing he has a secret weapon: a high-tech wing suit that allows him to fly, known as the EXO-7 Falcon. Sam joins Steve and Natasha Romanoff, aka Black Widow, as they fight HYDRA and Fury’s actual killer – an assassin named The Winter Soldier. Later on, after being unmasked its revealed that The Winter Soldier is none other than a brain-washed Bucky Barnes. Sam, Cap, Nat and Fury (spoiler alert, he’s not really dead) take down HYDRA and S.H.I.E.L.D. and Bucky escapes.

In the years that follow, Sam helps Steve Rogers search for Bucky, joins the Avengers and even shows up during Ant-man’s solo movie. In Captain America: Civil War, Sam joins Cap in going rogue and refusing to sign the Sokovia Accords. After a battle with the rest of the Avengers in Germany, Sam is arrested and sent to The Raft, only to be broken out by Steve soon after. During Captain America: Civil War Bucky AKA The Winter Soldier is framed for the bombing of the Vienna International Centre. It is eventually learned that it was Helmut Zemo who framed Barnes, and had reactivated his brainwashing. Zemo reveals that Barnes had been responsible for the murder of Howard and Maria Stark, whilst working for HYDRA. This leads to a fight between Tony Stark and Steve Rogers, and the eventual demise of the Avengers. Steve helps Bucky escape and takes him to Wakanda, where he is placed back into cryostasis, until  all of HYDRA’s control triggers can be removed from his mind.

After being broken out of prison Sam is presumed to have been traveling the world alongside Steve and Nat as a trio of nomadic vigilantes. The pair show up in Scotland at the beginning of Avengers: Infinity War, saving Wanda and Vision from an attack by the Children of Thanos. They travel to Wakanda where they meet up with with the ‘semi-stable 100 year old man’ that Cap left there previously. (see paragraph above) The battle of Wakanda ensues where Thanos manages to retrieve the Soul Stone (RIP Vision) and snaps half of the universe out of existence, including Sam and Bucky.

In Avengers: Endgame, the left over Avengers blip everyone back into existence, and in one of the greatest scenes in comic book movie history, Cap is joined on the battle field by every one of our heroes that were snapped away, including Bucky and Sam. “On your left” As the dust settles (RIP Tony Stark) Cap returns the Infinity stones back to where they belong, choosing to stay in the past with the love of his life Peggy Carter.

As Bucky and Sam wait for him to return they see a familiar figure in the distance, sitting on a bench taking in the view. It’s Old-Man Steve Rogers, he’s here to see Sam and has a very important gift for him, his shield.