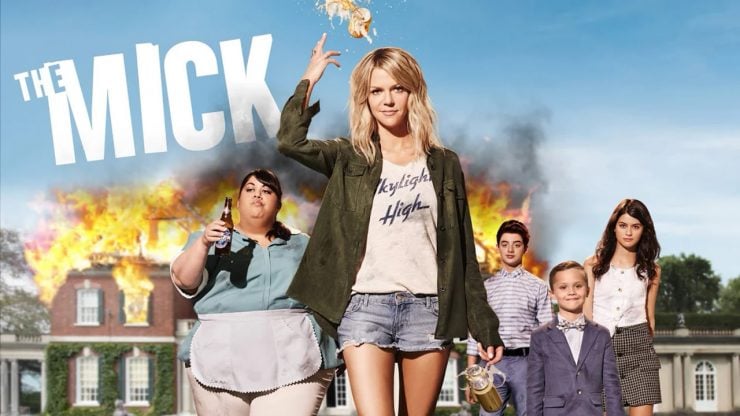 Disney+ has announced the full list of everything coming to the United Kingdom and Ireland in April 2022 including premieres of new Disney+ and Star Original Series, additional episodes of fan-favorite series, and new library title additions.  One of the new titles that will be added to Disney+ next month is Seasons 1-2 of “The Mick” which arrives on Wednesday, April 13, 2022.

THE MICK is a no-holds-barred single-camera comedy that gives new meaning to the phrase “dysfunctional family.” MACKENZIE aka “MICKEY” (Kaitlin Olson, “It’s Always Sunny in Philadelphia”) is a brash, two-bit hustler from Rhode Island who has spent her entire life shirking any semblance of responsibility. Lacking any drive, but in constant search of the next easy payday, Mickey is not without her charms. She’s smart, she’s fun, and despite all appearances, her head’s always in the game. She just needs a big win. That win kinda, sorta comes true when, looking for a handout, Mickey visits her estranged sister and billionaire brother-in-law in Greenwich, CT, but gets more than she bargained for, as this absurdly rich couple flees the country to escape federal fraud charges. In a surprising turn of events, Mickey must assume guardianship of their three high-maintenance and ill-parented children: SABRINA (Sofia Black D’Elia, “The Messengers,” “Gossip Girl”), an ambitious, 18-going-on-30-year-old who is a worthy adversary to Mickey; CHIP (Thomas Barbusca, “The New Normal,” “Grey’s Anatomy”), 13, an arrogant, entitled neo-con-in-the-making with an extremely punchable face; and BEN (newcomer Jack Stanton), seven, an adorably fragile nerd.

The life that Mickey has wanted for so long now is within her reach – the mansion, the convertible, the swimming pool, the walk-in closet full of designer clothes. But as Mickey is well aware, nothing in life is free. The price? Transforming these outrageously spoiled children into honest, hard-working, decent members of society – something this foul-mouthed, debaucherous and completely out-of-her-element woman knows absolutely nothing about. Being a mother was never in Mickey’s game plan, but these kids desperately need a parent. And as irresponsible as Mickey has been her entire life, she may discover that responsibility and motherhood aren’t the buzzkill she always thought they would be.