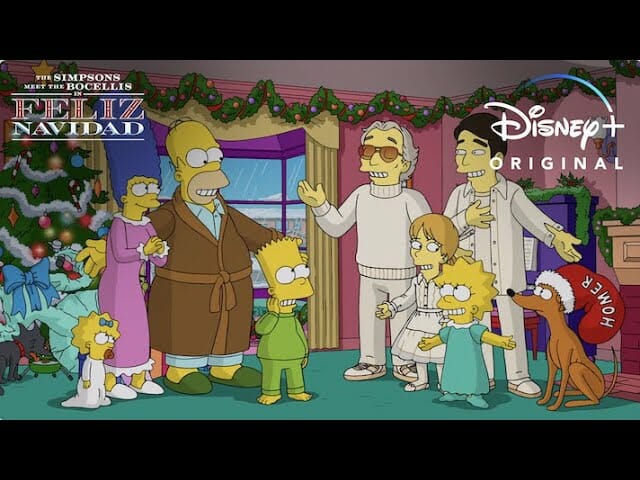 Disney has released a “Holiday Harmonies” clip from The Simpsons Meet the Bocellis in “Feliz Navidad” which is available to stream now on Disney+.

In the short from “The Simpsons,” Homer surprises Marge with the ultimate gift: an unforgettable performance from Italian opera superstar Andrea Bocelli and his 25-year-old son Matteo and 10-year-old daughter Virginia.

“The Simpsons meet the Bocellis in ‘Feliz Navidad’” is the latest in a collection of shorts from “The Simpsons” created exclusively for Disney+. The previously released shorts “Welcome to the Club,” “When Billie Met Lisa” (Emmy® nominated), “Maggie Simpson in ‘The Force Awakens from Its Nap’” (Emmy® nominated), “The Good, The Bart, and The Loki” and “The Simpsons in Plusaversary” are currently available on Disney+. All of these and more can be found in “The Simpsons” collection on the streaming service here: https://www.disneyplus.com/franchise/the-simpsons