Skip to content
Home » Blog » Thor: Love and Thunder – Trailer Breakdown & All The Details We Noticed 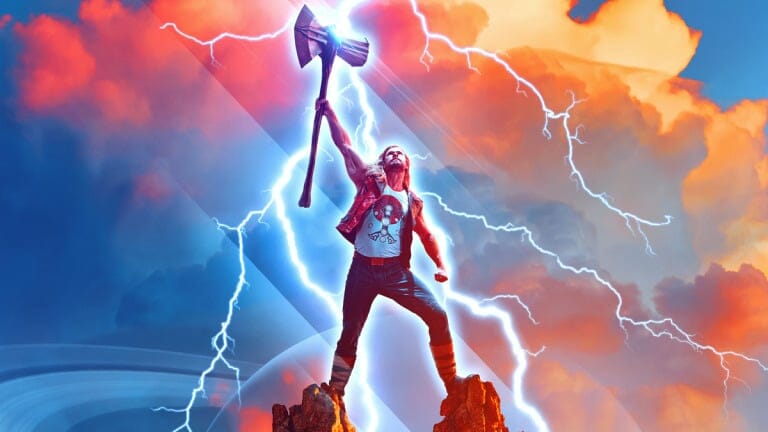 Thor is back with new friends, old weapons, new gods, and a classic rock soundtrack! It has been three years since we last saw Chris Hemsworth’s hammer-wielding hero leave with the Guardians of the Galaxy at the end of Avengers: Endgame. The Asgardian hero has returned in the new trailer for Thor: Love and Thunder, along with an epic Guns N’ Roses soundtrack.

This will be the fourth entry in the Thor series and the second to be directed by Taika Waititi. If this teaser trailer is anything to go by, Love and Thunder promise to be just as heartfelt as its predecessor, Thor: Ragnarok.

In typical Marvel fashion, not much is given away by the short teaser, but there are a few familiar faces, new locations, hidden references and blink-and-you’ll-miss-it jokes. We’ll break down the reveals and details we noticed in the first Thor: Love and Thunder trailer. 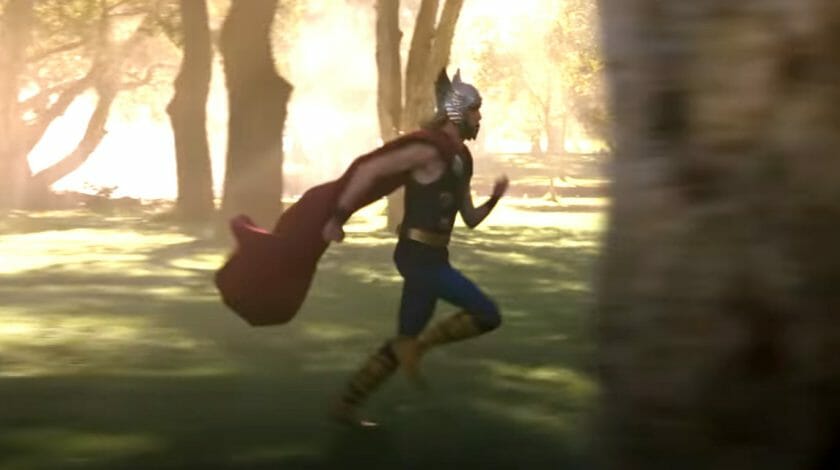 The trailer opens with a montage of Thor running through the woods on what can be assumed to be Asgard. He starts as a kid, then is seen as a teenager, then the fully grown hero we know and love. I’m sure the kid is played by Hemsworth’s son, who was seen on set when the movie was filmed in Australia. The costume worn by teenage Thor directly references Thor’s classic look by Jack Kirby, complete with a winged helmet. 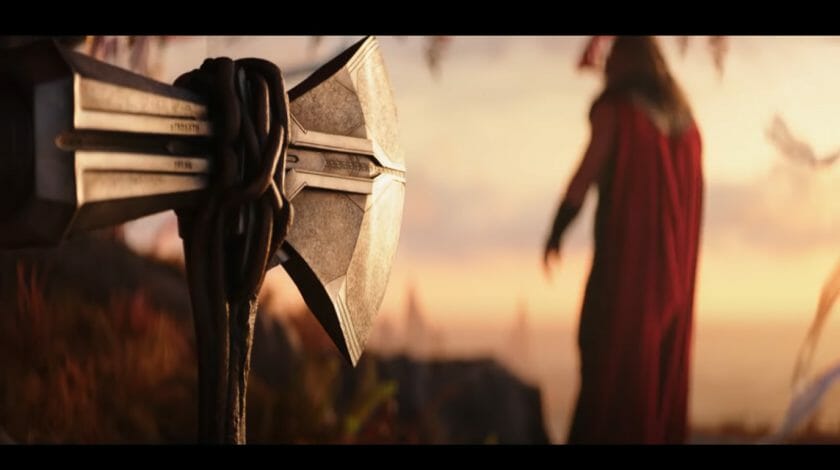 Thor reflects on how he used to use his hands for war. Now, the God of Thunder wants to leave his Asgardian legacy behind him and work for peace. We see him burying Stormbreaker in the ground and turning his back on the weapon he forged to kill Thanos. The scene looks very similar to the one in which Thanos was seen in The Garden. All Thor needs now is a scarecrow to hang his costume on. 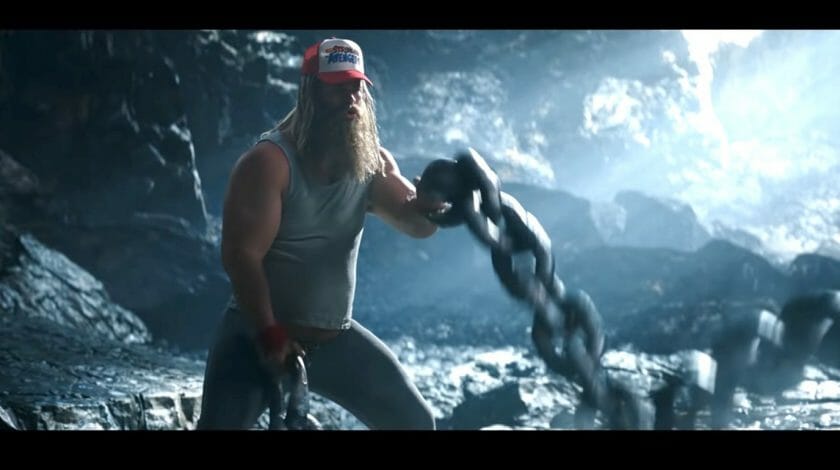 Who doesn’t love a good training montage, and the one here perfectly aligns with the film’s retro look. Thor seems to be getting back in shape after gaining weight in the time leading up to Endgame. He’s not hitting the gym, though, and we see him training in a dark cave next to a giant skeleton.

Asgardians of the Galaxy

Thor first crossed paths with the Guardians of the Galaxy in Avengers: Infinity War, then left New Asgard with them at the end of Avengers: Endgame. They’re still working together for at least part of this movie. In the trailer, we see Star-Lord (Chris Pratt), Nebula (Karen Gillan), Mantis (Pom Klementieff), Groot (Vin Diesel), Drax (Dave Bautista),and  Rocket (Bradley Cooper). There’s no sign of Gamora, though, whom Thanos killed in Infinity War. There is a variant Gamora out there somewhere, who travelled forward in time during Endgame, she’s confirmed to appear in Guardian of the Galaxy Vol. 3, but it doesn’t look like she’s been reunited with the rest of the crew just yet.

In the trailer, you can also see Sean Gunn’s Kraglin, wearing the fin he inherited from Yondu back in GOTG Vol. 2.

The trailer also reintroduces another familiar face. Waititi himself returns as the softly-spoken rock monster Korg. Korg and Thor can both be seen wearing 80’s-inspired outfits. Thor seems to be wearing a t-shirt depicting Yggdrasil, a sacred tree from Norse mythology, while Korg’s belt buckle appears to be a goat – more on the significance of goats later. Recent toy releases have described Thor’s look as “Ravager Thor” and there’s a hint of Jack Burton from Big Trouble in Little China. In MArvel comics there was a brief period in the early ’90s when the God of Thunder mantle was passed on to construction worker Erik Masterson. It didn’t last long, but Masterson retained some of his godly powers and carried on as the hero “Thunderstrike.” That character had a look very, very similar to the one we see Thor in here.

There is also a suspiciously large amount of space next to Thor. Marvel has a long history of editing its trailers to hide spoilers; Thor’s missing eye was concealed in the first trailer for Thor: Ragnorak. Is there another hidden character that has been edited out here?

There is an excellent shot of 2 flying goats pulling a Viking ship. In the Marvel comics and Norse mythology, Toothgnasher and Toothgrinder are mythical goats that pull Thor’s chariot. The goats first appeared in Steve Englehart and John Buscema’s 1976 Thor Annual #5. Look closely, and you can see a neon sign that says “cocktails and dreams,” as seen in the 1988 film Cocktail with Tom Cruise.

This new look is probably the best suit we’ve seen Thor wear in Live action. The gold references the “God of Thunder Reborn” design by Mike Del Mundo from Jason Aaron’s run of the Thor comics. Comic-accurate and colourful suits are always a win in my book, and I love that Marvel has kept heading in that direction recently.

Whatever changes Thor goes through in this movie seem to have fixed his mismatching eye. Thor’s eye was cut out by Hela in Thor: Ragnarok, and he since rocked an eye patch until Rocket gave him a replacement eye during their weapon quest in Infinity War. The eye famously didn’t match, but whatever happened, it seems to have been fixed now.

Christian Bale’s Gorr the God Butcher is nowhere to be seen in this trailer, probably because the villain is so very dark and brutal; his appearance would change the tone of the otherwise upbeat trailer. Gorr made his first appearance in Jason Aaron’s Thor: God of Thunder #2 from 2012, travelling the cosmos seeking vengeance against gods for never answering his prayers and killing them one by one.

The only sign we see of him in the trailer is in a recreation of a panel from Jason Aaron’s Thor: God of Thunder #3, the comic run that seems to be the inspiration for Love and Thunder. The fallen beast seen in the shot is a dead god, Falligar the Behemoth. In the comic, he was discovered as Thor first learned of Gorr’s brutality whilst tracking him across the universe, finding a trail of dead gods along the way.

New Asgard has become a tourist attraction; Viking cruise ships can be seen in the background. Valkyrie (Tessa Thompson) has taken up rule as King Valkyrie and appears to be taking part in a meeting with some governing council. Also seen at the conference is Korg’s BFF Miek, who can also be seen wearing a suit and tie.

We’re finally exploring other cosmic pantheons in the MCU, and Olympus looks excellent in the trailer. Dare I say it is very similar to how it was depicted in George Perez’s Wonder Woman run. We get a brief look at Russell Crowe’s Zeus; all be it from the back. Zeus, of course, could also mean the introduction of Hercules to the MCU, whose ongoing rivalry with Thor in the comics is terrific fun.

Could this brief moment and longing look start a romance between Thor and Star-Lord? It seems like something Taika Waititi would write, and I’m here for it.

It’s an excellent detail that this isn’t a new Mjolnir or even perfectly reconstructed; it shows sign of its destruction by Hela, but it is still brimming with cosmic energy, and who wields it?

Jane Foster returns to the MCU, and she’s the new God of Thunder. She looks so jacked, and even from this one-shot, they have nailed Jane’s Thor look from the comics drawn by Russel Dauterman. She even wears a winged helmet.

In the comics, Jane Foster is revealed to be worthy to wield Mjolnir when Thor Odinson is no longer able to. During this period, she adopts the mantle of Thor, joining The Avengers and eventually sacrificing her life. The comic run received praise from fans, and it looks like it will be a hit in live-action.

Was there anything we missed from the Love and Thunder trailer? Tell us in the comics. See Thor: Love and Thunder exclusively in theatres on July 8th 2022. You can watch the full trailer below.