2021 is the year of Marvel Studios. After more than a year without any new content, suddenly we’re inundated with newness almost every week. With WandaVision out of the way and The Falcon and The Winter Soldier half way through, Marvel have turned their attention to marketing the next big Disney+ show: Loki. In the latest trailer which dropped unexpectedly today, we get to see the God of Mischief bending time and causing all kind of havoc. The show is set to be a wild ride that sees Loki having to clean up the mess he created when he stole the Tesseract back in Avengers: Endgame. Here’s some of the key details we spotted in the newest trailer.

The trailer begins right where Endgame left off: Loki manages to pick up the Tesseract that the Avengers failed to retrieve during their trip to 2012 during the time heist. Having seemingly avoided everything that happened post 2012 and his eventual death at the hands of Thanos, Loki is captured and taken away by a heavily armoured guard.

“I know what this place is,” states Loki as he’s marched through what appears to be the HQ of the Time Variance Authority. He ends up in front of Judge Ravonna Lexus Renslayer, a TVA agent who, in the comics was a 40th Century Princess who had a love-hate relationship with Kang the Conqueror. Kang is set to appear in Ant-Man 3.

We see three statues here that depict the Time-Keepers, introduced in the comics during the 70s, the Time-Keepers are godlike beings who exist at the very last moments of the entire multiverse. They were created by He Who Remains, as a source of knowledge and a record of the multiversal history to teach the next cycle of universes. In simple terms if the TVA looks after time and space, then the Time-Keepers are like a hand-over for the next shift.

After a quick whirlwind tour of the TVA, Loki ends up in front of Mobius M. Mobius (I’m calling it now, this is going to be one of Owen Wilson’s best performances) Mobius is another comics character, a kind of middle manager in the TVA who’s had run-ins with the Fantastic Four over their time meddling. His appearance is taken from the comics, where the character’s look paid homage to beloved Marvel Comics editor Mark Gruenwald, the publisher’s continuity expert who, in the comics, every TVA employee was a clone of.

The premise of the show is set up by Mobius as he explains to Loki that by picking up the tesseract during the events of Endgame, he’s managed to break all of time. Loki will now be given the task of helping to fix the repeatedly-diverging timeline, thanks to his “unique perspective”. 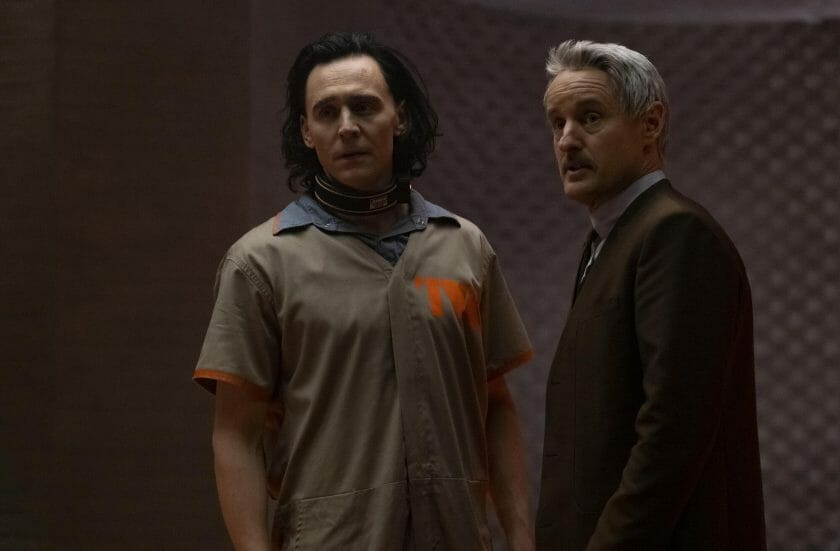 We get a shot that depicts Loki’s uniform, the back of it is printed with “VARIANT.” What’s important here, is that the Loki we’re seeing isn’t the Loki we’re most familiar with. As far as the series is concerned Loki remains dead after Thanos snapped his neck in the opening scene of Infinity War. This version of Loki is from 2012, he hasn’t started his path to (almost) redemption, and is fresh from the Battle of New York.

We see Loki and other TVA agents entering some of the alternate branches of time. We get a neon sign for “Roxxcart” which kind of looks like a supermarket and is clearly something to do with the Roxxon Corporation. In the comics Roxxon is an energy conglomerate that’s involved in all sorts of shady business. It’s also been in the MCU but in more of an Easter egg type background reference. We see Loki in a ruined New York, overgrown but with the Avengers Tower visible in the background.

Loki is seen on a purple planet avoiding what looks like a meteor shower in some kind of quarry. While this plays we get the idea that Loki’s relationship with the TVA isn’t entirely amicable, he’s heard mocking Mobius for thinking he has the upper hand in their relationship, and is seen confronting Renslayer and some TVA soldiers with his trademark knives. There are shots of what looks like Loki trying to avoid the TVA, which is to be expected. 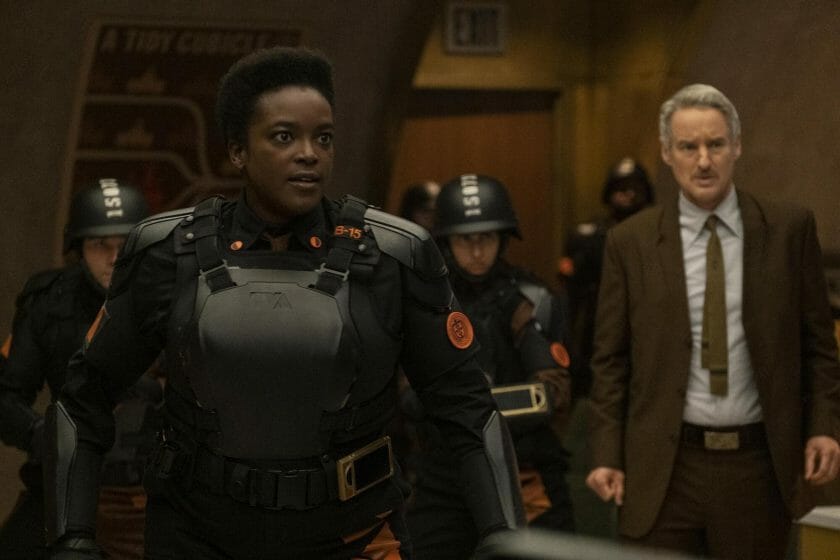 We get a glimpse of a black-hooded figure seen using the TVA’s temporal gates and attacking their agents. It’s the same figure seen in earlier footage and is almost certainly another Variant Loki. There’s a few more alternate realities including an Asgardian Throne room where Loki is seen in his more familiar costume.

There’s another big comics reference as we see Loki wearing a modified version of his helmet – the one with the bendy horns. He’s wearing a nice three-piece suit and is wearing a presidential campaign pin. This look references the 2016 comic series Vote Loki in which Loki takes part in the U.S. presidential election on a pro-lying platform. The series took loose inspiration from the 2016 Trump election campaign.

“You’re not big on trust?” Mobius asks as Loki is seen winking at an air hostess in a shot we’ve seen in previous footage. He’s disguised as D.B. Cooper, the infamous 1971 plane hijacker who successfully held a 747 hostage for $200,000 and then parachuted out of the plane mid-flight never to be seen again.

There’s a montage of action sequences in which we get one of the most interesting shots of the trailer, where Loki is seen sitting down with a blonde haired woman on a purple planet. There is already theories flying round that, given its purple glow the planet is Vormir, the resting place of the Soul Stone and the woman is Black Widow before she throws herself off the cliff and that the series will somehow bring Nat back.

Except it isn’t, and it won’t. The first indication is that when Nat chucks herself off the cliff, she doesn’t have her Infinity War era blonde hair, she actually has a long darker plait. While the mysterious woman is dressed similar to Nat, she’s actually the cloaked figure we saw earlier in the trailer, if you look closely you can see she’s carrying a sword. It is in fact Sophia Di Martino, set photos showed that she could be playing a female version of Loki, wearing a similar Asgardian armour to his own.

The trailer gives us an idea of what the TVA want with Loki and what the basic focus of the show is likely to be, but as always Marvel Studios is keeping its cards close to its chest in terms of the details its giving us. Lots still remain a mystery and you can bet that the bulk of the footage we’ve seen so far will have come from the first couple of episodes. What we can be clear on is that Loki is going to be a fast, action-packed ride across time and space and we’ll just have to wait until June 11th to find out whats going on when episode 1 premieres on Disney+

“Marvel Studios’ “Loki” features the God of Mischief as he steps out of his brother’s shadow in a new Disney+ series that takes place after the events of “Avengers: Endgame.” Tom Hiddleston returns as the title character, joined by Owen Wilson, Gugu Mbatha-Raw, Sophia Di Martino, Wunmi Mosaku and Richard E. Grant. Kate Herron directs “Loki,” and Michael Waldron is head writer.”