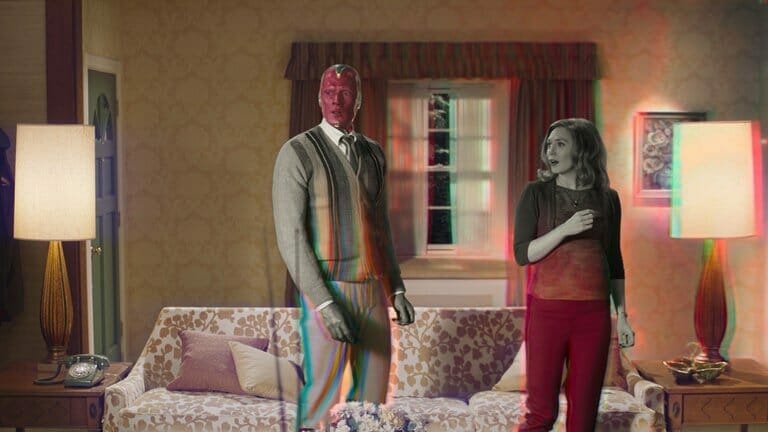 It’s safe to say at this point in the series that WandaVision has been a success for Marvel Studios. With only two episodes left fans have applauded the studio’s first offering for the Disney+ platform.

Before we get into it, as always please take this as your spoiler warning for WandaVision

As well as being well written, and packed full of references and Easter eggs, the show is visually stunning. Beginning in 1950’s black and white, episodes have taken us through decades of classic sitcoms, ending up in the modern day Marvel Cinematic Universe. It’s seriously well planned and one of it’s biggest qualities is it’s attention to detail, both in its script and the way it looks.

The show’s cinematography is down to Jess Hall, who’s previous work includes films such as “The Spectacular Now” and “Hot Fuzz” as well as award winning commercials. WandaVision though, is his first time working on a television series.

Hall made use of 47 different lenses, some custom modified to create the seven different sitcom eras in WandaVision, and spent time carefully studying lighting style, composition and camera movement.

With the series’ penultimate episode available tomorrow, Hall spoke to Variety about his influences, using certain lenses for MCU continuity and how moved he felt moved by the love story between the titular couple.

The start-point for the overall look of the sitcom episodes in WandaVision was to research old sitcoms, alongside director Matt Shakman, Hall created a document which listed the film, lighting and various lenses used throughout the years. This, along with creating a specific colour palette for the art and wardrobe departments to use, ensured the look of each era was as authentic as possible.

Something that WandaVision does well is shift from sitcom era to the modern day MCU, this helps create tension in the story and it relies on cinematography to make the viewer believe what is happening on screen. A perfect example is the moment when Monica is ejected from Wanda’s Hex, transitioning from the false sitcom reality of the 70’s into the modern day.

One of the influences that Hall used, that was easily accessible was the previous movies from the MCU franchise. Ensuring that familiar characters from the films looked the same on television was important. Viewers may not be able to pinpoint it, but there will be scenes in the upcoming episodes that look and feel like they could have been taken straight from “Avengers: Infinity War” or “Endgame”. This is very deliberate on Hall’s part as he used the very same Ultra Panavision lenses that were built for those movies. With such a complicated story, it’s important to bring an element of continuity.

One of the biggest moments of the series so far came in episode 7 when it was revealed that neighbour Agnes was, in fact Agatha Harkness, who had been engineering events from behind the scenes from the start. The shots for her “Agatha All Along” skit were all filmed as part of the scenes they came from, rather than all in one go. It is often the case with sequences like this that they are all shot together, but for WandaVision it was important to keep things as real as possible, so they were shot alongside.

Hearing about how in-depth the filmmakers were in making WandaVision, its easy to see why it looks and feels the way it does, you can really see where the budget has gone, and it’s no surprise that its currently the most watch show in the world.