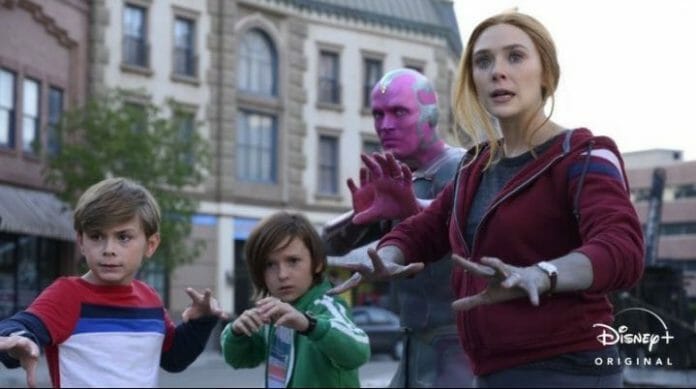 Marvel Studios’ first Disney+ series ‘WandaVision’ concluded on Friday with its 9th episode ‘The Series Finale’ Whilst the show’s ending quashed many fan theories, it’s post-credit scene has left us with a whole load of new questions about Wanda and what happened after the credits rolled on episode 9.

As always, this article contains spoilers for WandaVision episode 9 and the wider MCU, if you haven’t yet watched it, bookmark this page and come back to it once you have.

Credits scenes have become standard in films of the Marvel Cinematic Universe, during which one or more short scenes are shown during or after the closing credits. Most of the clips foreshadow future films, while some resolve plot lines or simply provide comic relief.

Marvel Studios started to place post-credits scenes at the end of each movie because Kevin Feige wanted audiences to stick around and acknowledge the people who worked on the film. He was inspired by the film Ferris Bueller’s Day Off, which caused Feige to watch all of the credits of films he saw. In the post credits scene of that film, the titular character, played by Matthew Broderick, breaks the fourth wall and tells the audience that the movie is over and they should go home.

So what of WandaVision? The series took until episode 7 ‘Breaking The Fourth Wall’ to give us a mid credits scene. Fans had their theories on why the first few episodes didn’t have credits scenes, but it was most likely down to the sitcom format of those early episodes. As the series ramped upon towards its conclusion, episodes 7, 8 & 9 were more like the MCU we’re used to, so the credits scenes seem perfectly placed.

Episode 9’s mid credit scene foreshadows Captain Marvel 2, as Monica is debriefed by an FBI agent who is revealed to be a Skrull sent by an old friend of her mother Maria. This was a fun little connection that leads into Monica’s next story, but it’s the second of the two credits scenes that everyone is talking about and it features Wanda herself. I’ll break it down.

The scene opens on a wide landscape of snow covered mountains surrounding a lake, as the camera tracks in we end up focusing in on a remote cabin, with Wanda sitting on the porch drinking tea, wearing casual clothes. As we zoom in further, we move into the cabin and into a room where we find Wanda in her Astral form, reading the Darkhold. The shot is a mirror of one that we see in Dr Strange, where he’s reading a book in his Astral form. We can also hear the voices of Wanda’s children calling out to her, just before the scene ends.

What I noticed after watching the scene a few times, particularly the start where the camera pans in was just how stylistically different it is from the rest of WandaVision. The wide landscape, the continuous one shot across the lake and through the cabin all felt completely out of place. This isn’t uncommon for an MCU post-credits scene, and it feels deliberate to me, as if the scene is meant to look like it belongs elsewhere.

I’m going to credit Superhero Theorist for the theory on this one, I’d been thinking about the scene all weekend and it was when I heard an audio clip he shared, along with his thoughts on the scene that I realised why the scene feels a little out of place.

The post-credit scene could actually be from Doctor Strange in the Multiverse of Madness.

It’s possible that the second credit scene in WandaVison may be set during the events of the second Doctor Strange film, taking place approximately 8 months after what happened in WestView. We see Wanda conjuring spells and mystical orbs, very similar to the ones used by Doctor Strange. She’s also in Astral form. These abilities took Strange months to master, even with training so it’s possible that Wanda could take a similar amount of time to master them on her own, given what Agatha revealed about just how powerful The Scarlet Witch really is.

The next hint is the cinematographic style in which the scene is shot. The way the camera tracks across the lake ending up as a close-up on Wanda is a perfect example of Sam Rami’s “projectile cam” shot, seen in his earlier films (example below). So it’s possible that this is Wanda’s introductory scene in the Doctor Strange sequel.

There is also a nice auditory Easter egg in the scene that you may not notice without stripping the voices away and only listening to the soundtrack. Whilst Wanda is reading the Darkhold, a slower than usual version of Dr Strange’s theme plays. Listen to the video below prepared by Superhero Theorist.

*SPOILERS FOR Episode 9 of #WandaVision*
.
.
.
.
.
.
.
.
.
.
We found a very cool Easter Egg in the #WandaVisionFinale. Check it out here! You have to keep your eyes *and ears* open for these types of things.@MultiverseMurph pic.twitter.com/c5KysL9H3F

So where exactly is Wanda? In the comics, the Darkhold was created at Wundagore Mountain by an Elder God. Its possible that Wanda, after taking Agatha’s advise decided to learn the ways of the mystic arts. In doing so, she will have used the Darkhold, and it could be that the book has led her to the place where it was created to study magic in self-isolation.

Could the villain of Doctor Strange 2 be the author of the Darkhold? We’ll have to wait and see when it releases in March 2022