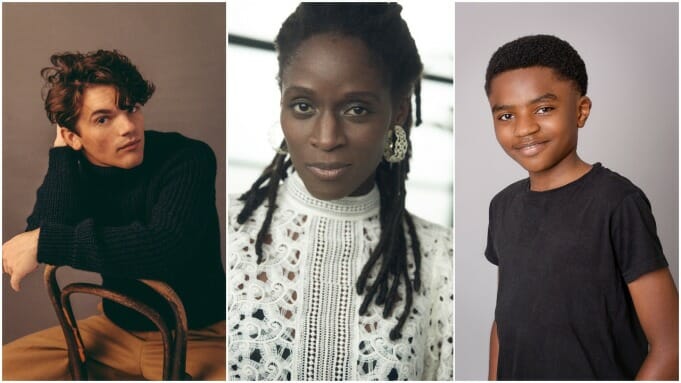 Edward Bluemel (Killing Eve, A Discovery Of Witches), Sharon Duncan-Brewster (Dune), and newcomer Eddie Karanja (After Ever After) will join Sterling K. Brown (This Is Us, Black Panther) in “Washington Black” at Hulu.  The 9 episode limited series is an adaptation of Esi Edugyan’s best-selling epic-adventure novel of the same name.  Previously announced cast also includes Ernest Kingsley Jr. and Iola Evans.

“Washington Black” follows the extraordinary 19th-century adventures of George Washington (‘Wash’) Black – an 11-year-old boy on a Barbados sugar plantation who must flee after a shocking death threatens to upend his life.

Brit Karanja will play the ‘Young Wash’, described as “a gentle-eyed, 11-year-old boy with a dreamer’s heart. Born on the Barbados sugar plantation, a shocking death forces him to flee by taking to the skies—sending him on a path to become a globe-trotting artist, scientist and inventor…. if he can survive the heartache lurking ahead and the hunter pursuing behind.”

Brit Bluemel will play William “Billy” McGee, a character who does not exist in the novel by Esi Edugyan but was created for the limited series by Selwyn Hinds. McGee is a wealthy British businessman who relocated to Halifax, Nova Scotia in 1837. For reasons that’ll become clear in the series, he has eschewed local women and accepted an offer to marry Tanna Goff (Evans) from London, a woman with a secret that forced her to relocate to Canada. McGee’s pursuit of Goff puts him in a love triangle that pits him against titular lead, Washington Black (played when older by Kingsley Jr), a state of affairs that threatens to plunge all three of them into danger.

Duncan-Brewster, will play Miss Angie, “a woman from Trinidad who has traveled to Nova Scotia to find the freedom to build something of her own. And she has—the store that bears her name, a community institution, and her own agency as the backbone of her community. But the question is whether she can make that power work within herself and re-build her heart.”

“Washington Black” is slated to begin filming next month.  The series is also expected to be released internationally as a Star Original on Disney+.