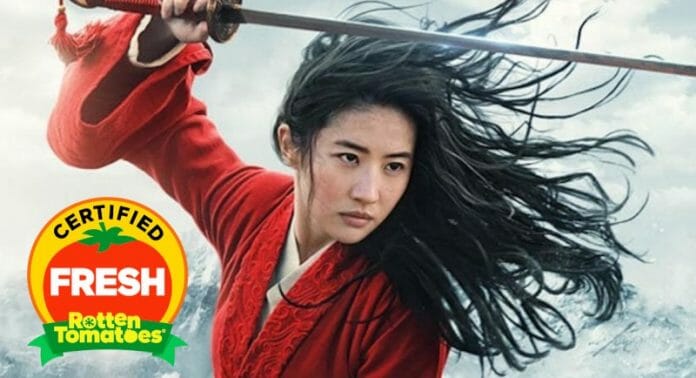 The majority of reviews from critics have been favorable with a current 78% rating out of 222 reviews on Rotten Tomatoes. Audience ratings are much lower though with a 55% approval rating. Of course, there’s no way to actually tell if those individuals purchased ‘Mulan’ or not.

The following reviews are opinions from critics and not DisneyPlusInformer.com.

I’m as athletic as a bed sock but, for so many reasons, this movie made me want to do backflips. London Evening Standard.

It might have been an excellent reinterpretation, were it not so heavy-handed and, well, Disney-fied. But what remains bears minimal discernible relationship to the original, while reading too much like a basic Marvel film. Salon.com

Apart from the lack of singing, romance, comedy and a mouthy dragon, this is just like the original. You might wonder what’s left. Well, $200 million buys a lot of scenery and sets and quite a few stars. This new version has spectacle in mind. Sydney Morning Herald

It’s an efficient retelling of a tale about a young Chinese woman discovering her power — affecting at times, occasionally quite lovely, but earnest, often clumsy, and notably short on joy. Wall Street Journal

If someone were to do a shot every time a character mentions “honor,” they would surely die of alcohol poisoning before the credits roll under a new recording of “Reflection” from Christina Aguilera. New York Magazine/Vulture

The visuals are the best thing about the film, the spectacle a dazzling distraction from some of the weaker elements of storytelling and performance. Tribune News Service

It’s performed with such consummate precision and showmanship that at times you would swear you were watching something with a heart. Daily Telegraph (UK)

Its origins date back centuries, and its animated predecessor is beloved within the ’90s Disney canon, but the latest version of Mulan couldn’t be more relevant, vital, and alive. RogerEbert.com

The colorful “Mulan” is striking in its visual beauty and production design. (Special kudos to Australian cinematographer Mandy Walker.) “Mulan” deserves to be seen on as big a screen as possible. Houston Chronicle

The international cast is nothing short of great, led by Yifei Liu’s movie star turn as a boundaries-shattering, stereotype-defying hero-warrior for her time and for ours. Chicago Sun-Times

A compelling and engaging adventure that represents not only an effective retelling of the 1998 film but arguably the best of the studio’s animated-to-live action reconstructions. ReelViews

Liu has enough charisma for a lead performance, but the script gives her no depth and no meaningful relationships to work with. Hollywood Reporter

Yes, I missed the 1998 animated film’s catchy music and talking animals – Eddie Murphy as a joking dragon called Mushu might be tough to swing in 2020 – but I was swept away by the breathtaking Chinese backdrops and high-stakes battles. New York Post

Stories about women bravely going against the cultural and social grain can be delectable catnip, and it’s no different here. New York Times

Little girls might be better off sticking with the cartoon for now; but this opulent, ambitious production and Liu’s focused, intrepid performance at its center, gives them something to grow into. Washington Post

A briskly efficient action movie of meticulous transnational appeal, one that is only now and then clearly working on tiptoes. Financial Times