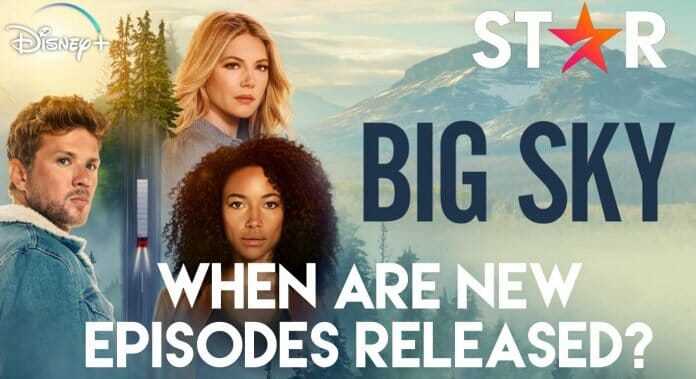 Big Sky, a new Star Original, will be coming to Disney+ on February 23, 2021, in the UK, Australia, Canada, New Zealand and select countries across Europe.

In typical Disney+ style, Big Sky won’t be dropping all episodes at once but will follow a weekly release schedule. Continue reading for the full details.

WHAT IS BIG SKY ABOUT?

WHAT TIME ARE NEW EPISODES OF BIG SKY RELEASED?

Big Sky will follow the usual Disney+ release schedule with new episodes dropping at 8AM in the UK and 9AM in most other European countries. Disney+ and Star originals will always be released at 12:01 pacific time, -8 hours behind GMT.

The release schedule for Big Sky is slightly different due to Star launching for the first time and midweek on a Tuesday. Big Sky will debut with two episodes followed by a new episode each Friday, following the usual Disney+ release cadence.

Big Sky is actually an ABC show that has brought over as a Star Original for international markets such as the UK. After originally being ordered for 10 episodes, the show has been given an additional six by ABC. The show is on it’s second hiatus right now in the US, and it’s expected that a further episodes will be coming in Spring. When episode 9 comes to Disney+ Star, we’ll be in Spring so it’s possible future episodes will lead right into each other without a break.

WHEN IS ‘BIG SKY’ SEASON 2 COMING TO DISNEY PLUS STAR?

As it stands, Big Sky hasn’t been renewed for a second season. The series has been quite popular in the US market, so a second season does definitely seem possible.