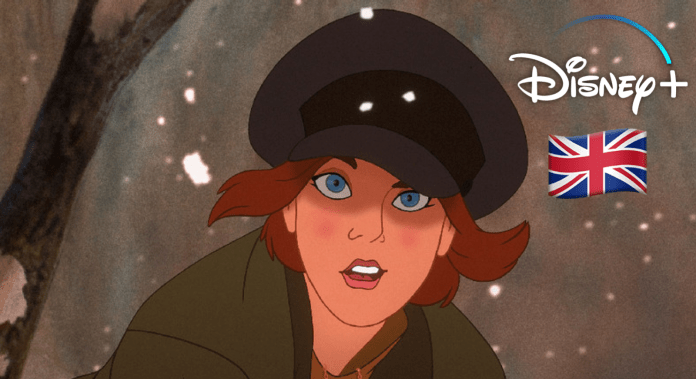 Disney+ launched in the United Kingdom back in March 2020 and many other countries across the global.

The streaming service offers thousands of viewing options which include original content created exclusively for Disney+ along with some of the best library content from Disney, Pixar, Marvel, Star Wars, and National Geographic.

Despite hours and hours worth of content to enjoy, there’s one movies in particular that fans are craving to watch, “Anastasia”

What Is Anastasia About?

The evil wizard Rasputin (Christopher Lloyd) puts a hex on the royal Romanovs and young Anastasia (Meg Ryan) disappears when their palace is overrun. Years later, the Grand Duchess (Angela Lansbury) offers a reward for Anastasia’s return. Two scheming Russians (John Cusack, Kelsey Grammer), planning to pawn off a phony, hold auditions and choose an orphan girl with a remarkable resemblance to the missing princess. They bring her to Paris for the reward, not knowing she’s the real Anastasia.

Technically, yes. ‘Anastasia’ falls under the 20th Century Fox (renamed 20th Century Studios) brand which is now apart of The Walt Disney Company after Disney acquired Fox in 2019. ‘Anastasia’ is one of the many properties that fall under the Disney umbrella due to the acquisition.

Can you watch Anastasia on Disney Plus UK?

“Anastasia” has definitely been one of the most requested movies for Disney Plus. After all, it was a huge box office success so naturally fans are looking to rewatch the movie. Disney answered the request and the movie is now available in the US and a few other regions around the world.

Unfortunately, “Anastasia” hasn’t made it to Disney Plus in the UK yet. Disney doesn’t typically share their plans on when a specific title will be available on their streaming service.

When Is Anastasia Coming To Disney Plus UK?

Disney hasn’t announced an exact release date on when Anastasia will be coming to Disney+ in the UK and Ireland.

It’s difficult to say exactly when the movie might be arriving on Disney+. Disney has added other 20th Century Studios movies such as the Ice Age franchise and “The Call of the Wild” in the UK, and with the movie available in other regions, it would appear it’s just a matter of time.

The movie is not available for streaming on any platform, so unless there are other contracts elsewhere, which is definitely possible, it would appear the movie is available for Disney+. When that might actually happen is unknown at the moment.

How To Request “Anastasia” in the UK

Submitting a request doesn’t guarantee that your suggestion will be added to Disney+. It’s also very unlikely you’ll hear anything back from Disney+.  Disney will use these suggestions for data purposes to learn more about what content subscribers are looking for.

How To Watch Anastasia in the UK?

Anastasia is currently available to stream to purchase on Amazon, Google, Apple and many more.