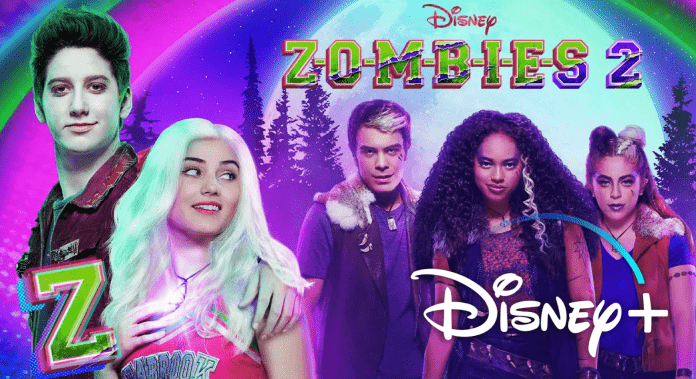 “Zombies 2”, which premiered 2 years after the original movie, officially debuted on the Disney Channel on February 14, 2020.

The movie, of course, follows Zed (Milo Manheim) and Addison (Meg Donnelly) who are back at Seabrook High, where, after a groundbreaking semester, they continue to steer both their school and community toward unity! But the arrival of a new group of outsiders – mysterious werewolves – threatens to shake up the newfound peace and causes a rift in Zed and Addison’s budding romance!

When Is Zombies 2 Coming To Disney Plus UK?

“Zombies 2” has definitely been one of the most requested shows for Disney Plus. Disney answered that request and the show is now available in the US, Canada, Australia, and New Zealand.

Unfortunately, this doesn’t include the UK at the moment. Disney hasn’t announced when this movie will be coming, so as it stands, “Zombies 2” is not available to watch on Disney+ in the UK.

It’s important to remember that “Zombies 2” has just arrived in the US, which launched about 5 months ahead of the UK. Disney is adding new content each month and new announcements are often made at the beginning of each month.

It’s difficult to say exactly when the movie might be available on Disney+, but with Disney Channel, DisneyXD, and Disney Junior leaving Sky and Virgin platforms next month, this will definitely increase the chances.

From 1 October,  Disney+ will become the exclusive home for content from Disney Channel, DisneyXD, and Disney Junior in the UK. The channels are set to come off the air at the end of September this year.

How To Watch Zombies 2?

Just because “Zombies 2” isn’t available on Disney+, doesn’t mean that you can’t watch the movie! You can purchase or rent “Zombies 2” from Amazon and other providers.