Skip to content
Home » Blog » When Will ‘Mulan’ Be “Free” On Disney Plus? 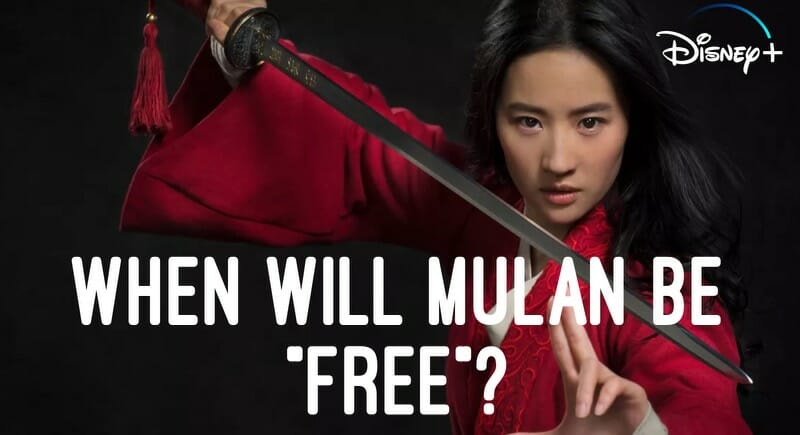 Disney announced in early August that “Mulan” would be coming to Disney+ on Friday, September 4th via “Premier Access”.

Subscribers wishing to have access to the film will have to pay $29.99. The good news is that once you purchase the film, it will remain available to you as long as you stay subscribed to Disney+.

“Mulan” has seen its fair share of delays due to the COVID-19 outbreak. The film was originally first scheduled to premiere in theaters on March 27th. The film was then moved to July 24th, then again to August 21st, and then the film was removed from Disney’s theatrical calendar entirely before the announcement that it was coming to Disney+.

The movie is available in the US, Canada, Australia, New Zealand, and Western European markets which include the UK. “Mulan” will also launch in movie theaters in selected countries on the same date.

How long does it take for a movie to arrive on Disney+?

This question wasn’t particularly easy to answer before COVID, but it’s definitely more difficult now. Usually, a movie will stay in cinemas for 90 days, after which it gets a home entertainment release (4K, DVD, and Blu-Ray) a few weeks later. Disney+ then gets that movie about four months after the physical media release.

Here’s a look at just how long it takes from theatre release to Disney+:

You’ll see that there’s typically about a 7-month window from movie theatres to arrive on Disney+.

However, COVID has definitely changed the release window as “Star Wars: The Rise of Skywalker” was moved forward by 2 months as a result of the pandemic, and to celebrate Star Wars day. “Frozen II” followed a similar path, premiering in November and releasing digitally in February. The sequel was due to land on Disney+ in June but was also brought forward due to the pandemic.

When Will “Mulan” Be Free On Disney Plus?

If you consider “Mulan” a theatrical release — and it is being released theatrically in territories where that’s an option — that would place “Mulan” as “free” on Disney+ around April 2021, following the typical 7-month release schedule. This would be our best-educated guess until the below information surfaced.

Multiple different screenshots just like the above have been making the rounds recently which clearly states that “Mulan” will be coming to all subscribers on December 04, 2020. This is exactly 3 months after the Premier Access release date.

We should add that we think the screenshots are legitimate but that doesn’t necessarily mean the information is correct. It’s important to note that most individuals, including ourselves, aren’t seeing the above release date when searching for “Mulan” on Disney+. This information clearly wasn’t ready to be released yet. All screenshots have only been from Disney+ regions in Europe, nothing for North America at the moment. It’s possible the information is just a placeholder and details from these placeholders have been incorrect previously.

It’s probably an understatement to say that “Mulan” coming to Disney+ at an additional cost hasn’t been received particularly positive by the majority of Disney+ subscribers. It’s definitely a surprise that “Mulan” could be released for regular subscribers this year. We would think Disney needs to justify the $30 price purely via exclusivity due to missing out on the big screen experience. We also find it bizarre that Disney would announce the regular release date as this would surely affect sales knowing the exact date you’ll be able to watch it for “free”.

With that being said, if those $30 payments stop rolling, it’s possible that Disney could cut their losses and revert to a much shorter release window than the typical 7 months.

Of course, this is an unprecedented situation caused by a global pandemic. So, until we hear something official from Disney, take these estimates with a grain of salt.