Skip to content
Home » Blog » Will ‘Mulan’ Be Coming To Disney+ in the UK? 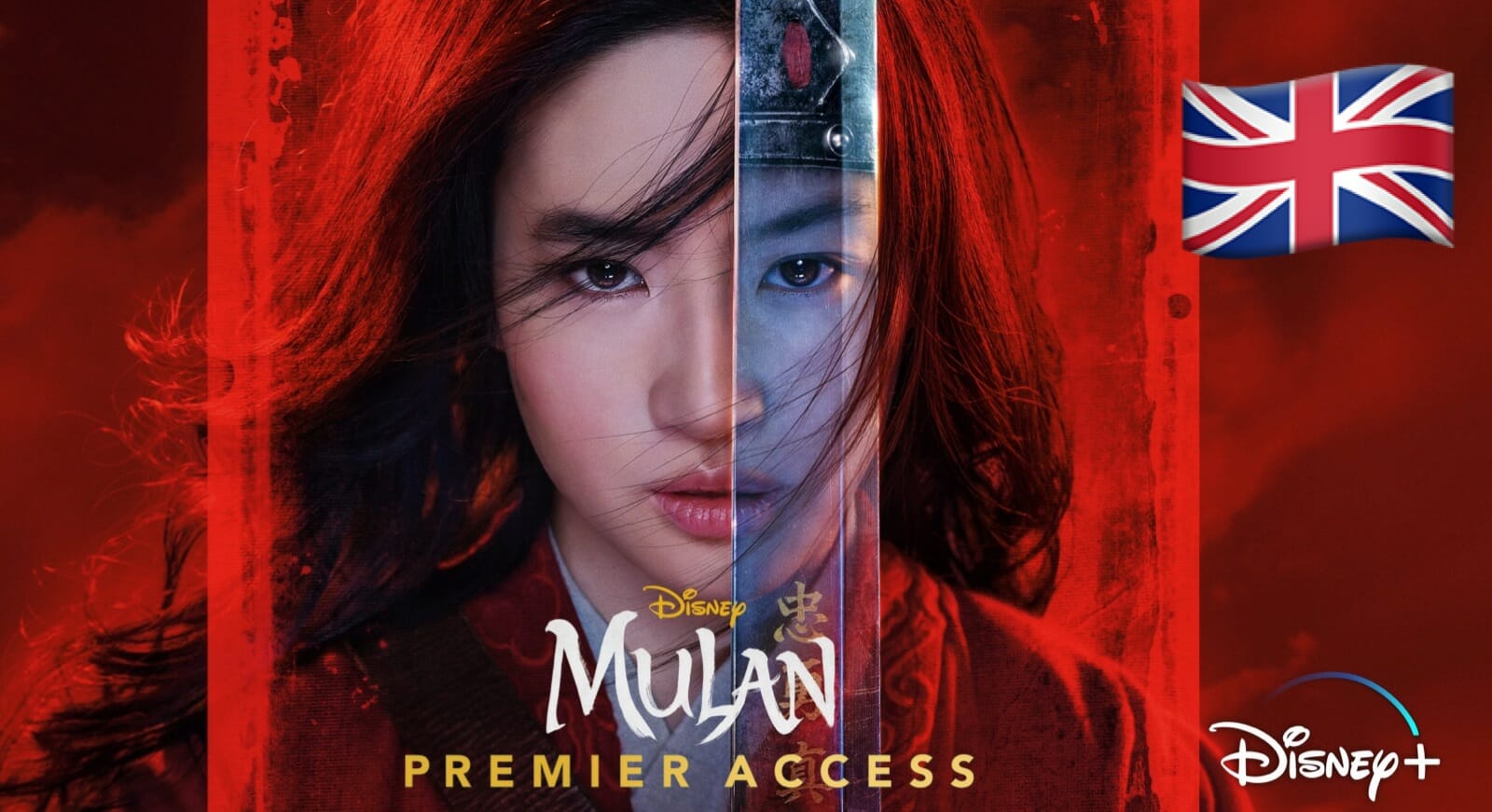 Disney announced a few weeks ago that “Mulan” would be coming to Disney+ on Friday, September 4th on a “premium basis”.

Disney also confirmed that the movie will be available in the US, Canada, Australia, New Zealand, and Western European markets. “Mulan” will also launch in movie theatres in selected countries on the same date.

The decision to move “Mulan” to Disney+ was made after multiple delays due to Covid-19. The film was originally first scheduled to premiere in cinemas on March 27th. The film was then moved to July 24th, then again to August 21st, and then the film was removed from Disney’s theatrical calendar entirely.

There have been quite a few questions about “Mulan” coming to the U.K., whether it’ll be a Disney+ release, cinema release or even if the movie will actually be coming at all. Let’s break down what we know so far.

When is “Mulan” Coming To Disney Plus U.K.?

Disney CEO Bob Chapek confirmed during the Q3 investors call that “Mulan” will be coming to select countries on September 4, 2020, which included a very vague “Western European markets”. The U.K. would, of course, fall into that category, but the fact that such a huge market such as the U.K. wasn’t mentioned, speaks volumes. After all, Disney did mention other countries by name such as the US, Canada and Australia.

Has Disney marketed the movie in the U.K.?

Disney has slowly been ramping up the marketing for the movie ahead of the September debut. This includes trailers, social media posts and even interviews with talent. All social media and press information has come directly from Disney+ US. As it stands, there’s been zero marketing from Disney+ U.K.

Disney will often start marketing a movie months in-advance, of course this isn’t the case with “Mulan” as the decision to move the movie to Disney+ was announced just a few weeks ago. There’s no question that it’s definitely unusual to see a movie with zero marketing weeks before it’s expected debut. It’s definitely a deliberate decision to not market the movie for U.K. audiences.

What are cinemas saying?

Cinema chains in the U.K. are definitely under the impression that “Mulan” won’t be available to them to show in their cinemas.

Phil Clapp, chief executive of the UK Cinema Association said: “With cinemas across the U.K. now continuing to re-open and welcome back their customers, the decision by Walt Disney Studios to put “Mulan” on their Disney+ service and not into cinemas will be seen by many as hugely disappointing and mistimed.”

On Wednesday, The Hollywood Reporter, quoted a letter sent by Disney to U.K. cinema operators in response, in which the company reportedly apologized and said the decision was “not taken lightly”.

“Given that COVID-19 has disrupted large parts of the content pipeline and markets are in vastly different situations right now, and after delaying the global theatrical debut multiple times, we are subsequently taking a tailored approach to this release,” it said.

Although around 40% of U.K. cinemas are reported to have reopened, many cinemagoers have not returned. Last weekend’s box office takings were just 3% of the total on the same weekend last year.

Cineworld also replied to a customer asking when they’ll be able to book “Mulan” tickets. 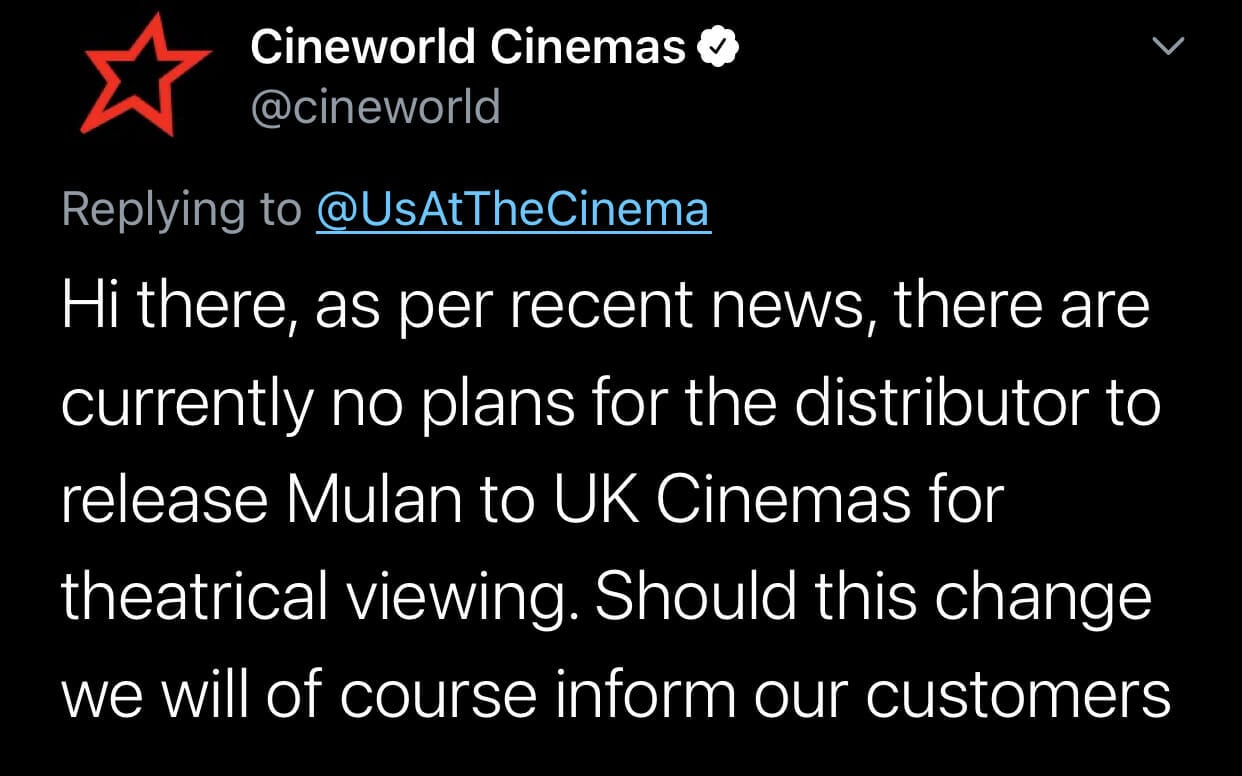 Providing that the information from The Hollywood Reporter is accurate, this gives us our best indication that “Mulan” isn’t coming to cinemas and will be heading to Disney+. As “Mulan” was always expected to come to Disney+ at some point, the real unanswered question is if it will actually be released on September 4th or after the regular “theatrical” window is complete.

The last noteworthily piece of information we have is a screenshot that was shared in our Disney Plus U.K. group. As you can see in the image below, it’s a landing page for “Mulan’” It also indicates that if “Mulan” does come to the UK, it will cost £28.99. 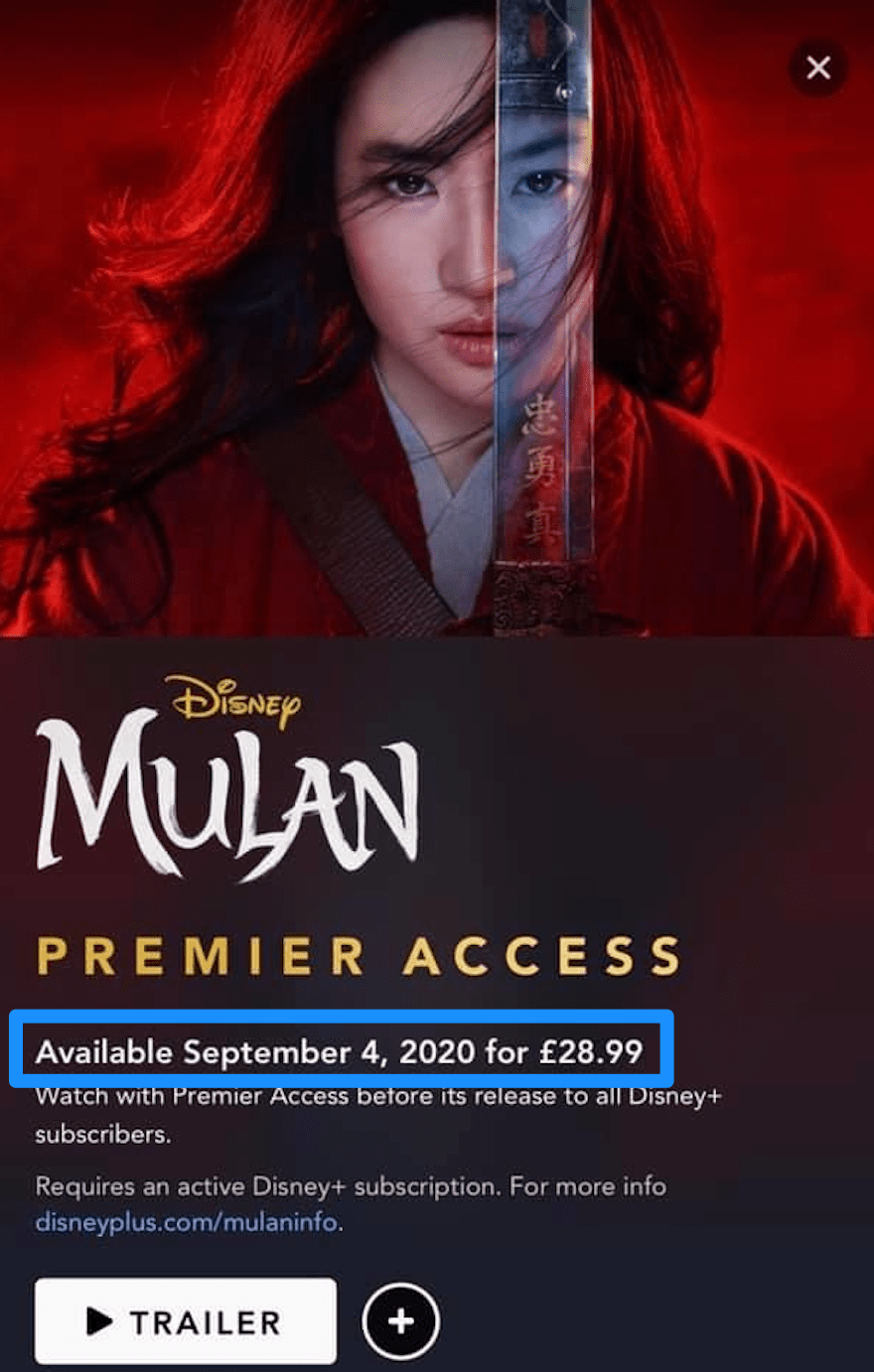 When Scott, the person who shared the screenshot, refreshed Disney+, the page was removed completely. The page looks genuine and matches other countries, so it would appear that this was released by mistake, is a bug or isn’t a legitimate screenshot.

This one will remain a mystery for now, but with September quickly approaching, we’ll definitely find out one way or another very soon. Stay tuned to Disney Plus Informer!