Skip to content
Home » Blog » Will Red-Hulk Appear in the Upcoming Marvel ‘She-Hulk’ Series for Disney+? 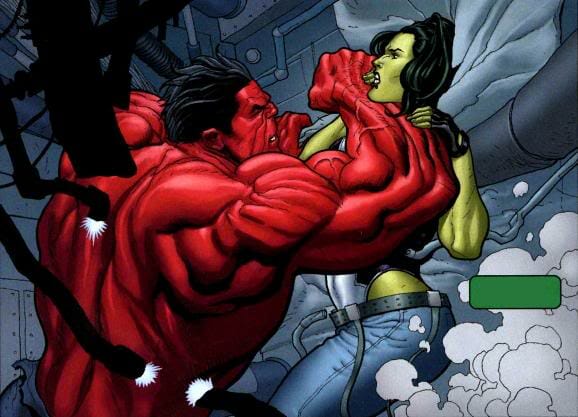 According to a rumor on thegww.com, the “Red Hulk” will be joining the upcoming “She-Hulk” series coming to Disney+.

The “Red Hulk” was introduced in the comic books in 2008 and has been one of the main enemies of “The Hulk”.  The article says William Hurt will see his character General Ross transform into the Red Hulk in the new ‘She-Hulk’ series.  Marvel fans already know General Thaddeus “Thunderbolt” Ross from a number of Marvel movies including “The Incredible Hulk”, “Captain America: Civil War” and both Infinity Wars.  The character will also appear in the upcoming “Black Widow” movie, which will be released in theaters in May.

In the comic books, the “Red Hulk” eventually becomes a hero, creating “The Thunderbolts” team, which consists of former villains turned heroes and anti-heroes including Deadpool, Elektra, Agent Venom, and Punisher.

It’s also been rumored that the “She-Hulk” series will see a spinoff to either a “Thunderbolts” Disney+ series or movie.

“She-Hulk” is scheduled to begin filming in Atlanta in August. The script is being written by Emmy-winning screenwriter Jessica Gao (Rick and Morty).  Preliminary casting is currently underway to find a 30-40 year old women to play Jennifer Walters aka She-Hulk, who is Bruce Banner’s cousin.

Plot details haven’t been released, however Kevin Feige described the series as “unlike anything we’ve done before”.