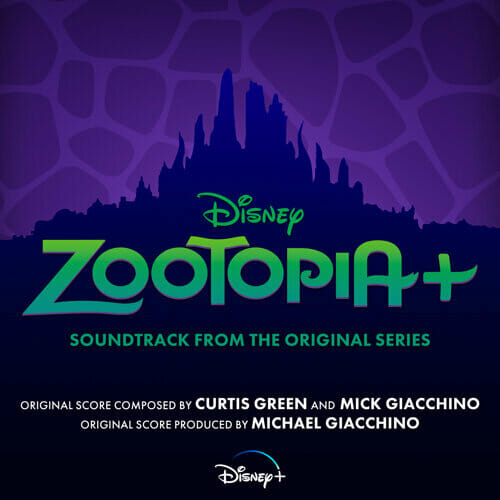 Walt Disney Records has released the soundtrack album for the Disney+ original animated series “Zootopia+.”  All 6 shorts are available to stream now on Disney+.

The album features the original score from the show composed by Curtis Green (Dug Days) & Michael  Giacchino.  Giacchino has previously worked on Up, Lost, Spider-Man: No Way Home, The Batman, Jurassic World, Star Trek, The Incredibles, and Ratatouille and recently directed Marvel’s Special Presentation Werewolf By Night.  He also co-wrote the original song “Big Time” with lyrics by Elyssa Samsel & Kate Anderson (Olaf’s Frozen Adventure, Central Park) for the episode, which centers on small-time weasel crook Duke Weaselton (voiced by Alan Tudyk) as he rethinks his life and pictures himself as a good guy.

“Zootopia+” heads back to the fast-paced mammal metropolis of Zootopia in a short-form series that dives deeper into the lives of some of the Oscar®-winning feature film’s most intriguing residents, including Fru Fru, the fashion-forward arctic shrew; ZPD dispatcher Clawhauser, the sweet-toothed cheetah; and Flash, the smiling sloth who’s full of surprises. The series is directed by Josie Trinidad (Co-Head of Story, “Zootopia”; Head of Story, “Ralph Breaks the Internet”) and Trent Correy (Director, “Once Upon a Snowman” and “Drop”), and produced by Nathan Curtis (Associate Producer, “Encanto” and “Raya and the Last Dragon”).

You can check out the trailer for the series below and read our review here.